Photo of the Day – Beautiful Foliage 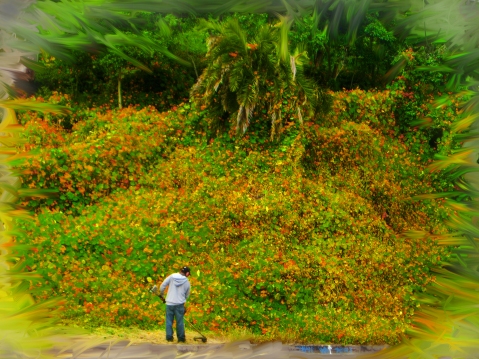 The exact point of change seems to not exist. Maybe it happens in minute evolutions, so pint size that only if you were paying close attention and knew what to look for you’d see it. Trees in the north, grew even larger by Northern California and transformed into mammoth sequoias, muting the light from the sun, a natural roof of green and brown. Wild flowers were more colourful in So Cal, yellow, purple floral lining between the road and the endless stretch of baked white beach. Even bushes, one of the most unrecognized plant for it’s beauty, now grew up the side of steep inclines, A Van Gogh of dotted, precise colours, that as that landscaper could tell you quite frankly, needed constant maintenance or it would burst forward, a continuous growth of foliage, enveloping all living and inanimate things in it’s path, a picturesque, less gelatinous blob. Kudos California bushes, Canadian bushes….take note, that’s how you get attention, not by being prickly.

Photo of the Day – Rare Pines in the City

This piece of beauty lies within the city limits of a sprawling mecca. San Diego to be exact, the last big American city before Mexico (there are a few smaller places before California ends and Mexico begins….unexpected, smaller places that you only find out when you think you’ve made it to Mexico by bicycle once you’ve hit San Diego only to realize you have four more cities, a least, to pedal through before your victory dance commences). Torrey Pines State Natural Reserve only is what it is because a few nature enthusiasts saw the importance of maintaining the rugged, natural landscape that existed before it was dipped in concrete, sprinkled with bits of steel and sold to aimless suits and ties and skirts, who meant to make it by building skyscrapers with windows facing other viewless windows on even bigger skyscrapers.

Don’t read into the description wrong, I love those big skyscrapers and their histories. I love hearing of the odd personalities that once sat behind the old oak desks and spewed out decisions to their underlings or the shoe shop owner who lost it all by investing in two million pairs of the shoes that didn’t make the fall fashion. The millions of continuous stories and people watching, make these buildings as vitally interesting to me as the “landmarks”, the religious centres, the “must see before you die”s. History is not too much different from gossip, with our interests lying in the unabashed, the more display filled and unbelievable epics, but also in the minutia of day to day life.  I find the functional and dysfunctional, the awe of the past and how the present came to be, the rust and the sheen, as equally as enticing and question riddled.

Anyways, I’ll get into that when I am not as zonked out as I am right now. Nature was something I had little to no desire seeking out before traveling. I liked history and nature to me was just untapped land that would look way better with, I dunno, a temple to Zeus to engage your imagination or an aqueduct running through it’s tundra or mountain scape. That’s before I travelled a realized that the shapes that I had associated with nature were as varied as the building styles of all cultures and that they too had their stories. In fact, much of what I respected in the man made monoliths, the variance, the impossibilities of balance,  were stolen from their larger, and more natural predecessors.

Torrey Pine Sate Natural Reserve was one of those places where it was as if nature took offense to my attitude toward it and and flung open it’s insides to reveal the dramatic curves of it’s jutting rock edges, where these rare pines cling desperately perched over thousand foot drops into the banging percussion of the emotionally churned blue sea’s clambering waves. Such a fool I was to doubt the thousands and thousands of whispering words that nature’s picture drenched my soul in. And yet with all the words merry go rounding in my innards, I stood silent, letting the my surroundings piously brag to me.

The edge and bottom of California - Torrey Pines Nature Reservation