So this time around I decided to get a little artsy with some simple features on Photoshops Elements. What do you think? Kind of neat, is what I’m thinking.

Like Neanderthal Man’s evolution into modern day human beings, many factors, changing landscapes and climates contributed to this happening. I think the same can be said for straw people. Unlike man, the straw people evolution takes considerably less than millions upon millions of years. In fact, I am pretty sure, the creative genius behind this master creation came up with monumental upgrade in a single evening, possibly sipping Peach Schnapps, hopefully gorging himself with something as equally stereotypical German.

Straw Man on a Chopper, Germany

This straw man is a lot more human like. While his brothers and sisters are helpless from their countless predators and the daunting etherial elements, due to their lack of legs and/or protective layer, this dude has both legs and a vehicle to boot. He’s even doing the gun fingers. He is basically the Fonz, the Marlon Brando of his kind. Possibly even a Jesus like figure to his followers. I’d say I would have been a follower if the restaurant he was luring me too was a few km’s off the path. Unfortunately I didn’t have that time. If the gun finger didn’t shoot you dead with conviction in your tracks that a wonderful smogesboard was awaiting you, then the cool, hip backwards hat would.

My trusty flashlight kept the lions, tigers and bears away on my first night camping

Everyone will have their preference on what they should bring with them on a long haul bike adventure. As they should. For instance, some people like those quick dry towels, like the one I originally had by Mcnett (http://www.mcnett.com/). I ended up throwing it away. For me, it was too thin and felt like I was drying myself of with a wet dog. Not my cup of tea, but for others, it suits their needs.

So as I mentioned, this is my biased list. If you have beef with my list, drop me a line and we can duke it out American Gladiator style. No, but seriously, send me an alternative and I’d be curious to try it out on my next voyage.

The second thing to note is that all the items on this list were tried and tested items that were needed from day one to day final. I’ll mention as we go along items I brought and I threw away as well, just for comic relief, but I’m just letting you know I didn’t really research each item before I went on the trip. I used common sense about human necessities, went into the local outdoors and sports shop and filled the void. I think that’s a good starting point. It’s also nice to go into the store and listen to experienced outdoors men. They might bring your attention to things you didn’t even think of.

Okay. Enough banter. Let’s get into this.

The GPS I used, the Garmin Etrex (www.garmin.com)

One thing I didn’t think of that I did purchase was a Garmin GPS system that would attach to the handlebars of my bike (http://www.garmin.com/us/). A man with a gratuitously large beard and a viking presence to him convinced me to get it. It had all the bells and whistles, maps galore, time keeper, long lasting life on double As and most importantly it was in COLOUR! As I started the trip, I was enthralled by this little device. It was my friend, my guardian angel,  my confident, my certainty that a town was around the corner and a good restaurant was near by. What I city slicker I was. The problem I started to find with it was that I would look at it constantly. I’d stare at the graphics of passing trees and golf courses, as opposed to the real beauty of the landscapes surrounding me. Nothing was unexpected, nothing just arose around the corner that I didn’t  know wasn’t there.

Now, that wasn’t to say that I DIDN’T look up and that I didn’t take in where I was. I ended up turning it off and using it only when I was desperate for food or shelter or was completely and utterly lost.  On the coast tour, it was hard to get lost. Almost impossible. If my bike was underwater, I was too far West. The issue was, in California was the road rules for bikes, not which direction I should be heading. I ended up ditching the use of the GPS all together. Due to my reliance on it I had started to have nightmares of miles, digitally counting down. That’s where I had to draw the line. 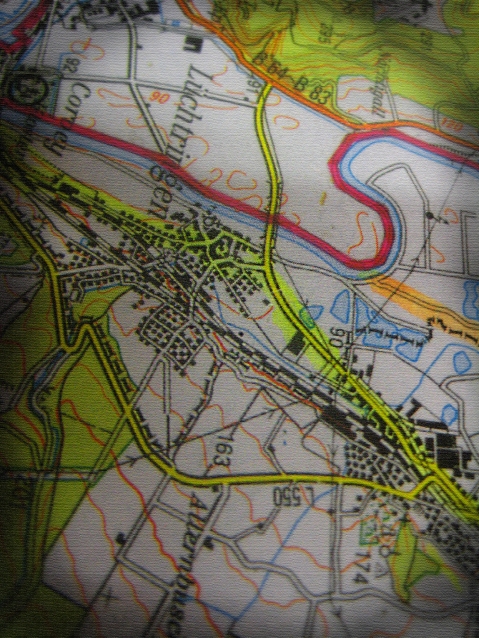 A section of Route Planning. Most important thing is you understand it.

Through touring, I discovered my love maps and route planning. I colour code my maps and note places of interests along the way as well (touristy things, different foods of the area, odd museums filled with stuff gophers in Cabbage Patch costumes). I am a big fan of the Michelin Map books, where you can tear out the pages as you go along. I’ll get into the details on those later. I love setting out down the road with a route in place that I have to check at each turning point, each gas station, each little town. And if, on a whim, I want to go somewhere else, I do, with full knowledge as to where I am going and what I am in for. If I’m lost, I can always ask someone as well.

The Heat. Never Bring a Backpack on a Bike Trip.

GPS is great in situations where there are few cities to use as checkpoints on a map to assess you are going the right way and/or where there are few people to ask directions. Asides from those instances, I feel that GPS take away from the thrill of adventure, the victory over struggle, the innocence of it all. As long as you do your prep route work then the GPS acts primarily as unnecessary safety net and even sometimes a deterrence to take the road less travelled. Plus it beeps a lot. Or worse, has a computerized voice that tries to pronounce street names. Thank god the english language has so many ridiculous rules that you get a to laugh at how horribly your GPS butchers them, as it desperately tries to sputter through multi-syllables, the silent g’s and h’s.

Wow. A lot to say about GPS and the reasons behind this list. Not much of a list with one item. But rumor has it that writing epically long blogs is synonymous with stereotypical grandparents showing their relatives slideshows of their “thrilling” vacation to Delaware. So next time, AN ACTUAL LIST!